Ok, this Dubai ports thing won't go away. Liberals will happily embrace anti-Arabism since they believe it will make Bush look bad. Conservatives are trying to prove they are "Independent" of Bush, seemingly unknowing that their re-election campaigns will be tied to him, no matter what they do, short of switching parties. All-and-all, I think Republicans deserve to lose the Congress. Unfortunately, the Democrats don't deserve to win it back.

But I digress. I wondered what the largest Arab/Islamic Rights group, CAIR, had to say about the obviously anti-Arab sentiment on this UAE deal.

Well, according to their web site... absolutely nothing. They are still harping on how evil it is for the Danes to have drawn pictures of their "Prophet."

So, apparantly, one can only assume CAIR doesn't really have any interest in protecting the rights of Arabs who aren't terrorists. Am I wrong?

Some Voices of Sanity

Not everyone is going with the knee-jerk reaction that all Arab countries are bad:

Bill O'Reilly makes a better case than I ever could.

The Wall Street Journal puts everything in perspective.

Rush Limbaugh seems to be implying that Democrat opposition is due to their ties to the Longshoreman Union, and not for concern about National Security. I don't think I can disagree.

I don't really know who this guy is, but he seems to agree with me (National Review in general has been rather skitzo on the issue).

Finally, we have found an issue to unite both the paranoids of the Right and the Left, as well as a large dose of the moderates. The issue? The United Arab Emirites, a longtime ally of the United States, has a bid in to buy a British company that currently operates many of the major ports in the US. The Talking Heads, ignorantly only seeing Towel Heads, are freaking out. (Let me just point out that I am not being racist, I am accusing THEM of being racist. It should seem obvious, but a similar misunderstanding is what got Rush Limbaugh kicked off ESPN.)

Essentially, the political class wants to send this message to the Arab world: If you try to convert to Capitalism, we will shun you, you damn Camel-Jockies!

Now, for a reality check. The UAE has been an ally of the United States for a long time. They are a westernized Arab nation, probably as westernized as you'll find since the fall of the Shah. When Arabs want booze or make-up, they get it from the UAE. They supported the US in the Afghan War and in BOTH Iraq Wars. As we speak, they are training forces in Iraq.

"But wait!" you say. "They have terrorist sympathizers within their borders!" Well, duh. So does Britain, France, and Ohio.

Maybe I'm wrong. All I'm asking is that perhaps we should take a minute and breathe before we tell an ally in the Arab world to fuck themselves, simply because they are Arab.

Today is President's Day, which explains why I'm not at work. This holiday, combining Washington's Birthday with Lincoln's Birthday was borne of Richard Nixon alienating the Federal Worker's Union from the Republican Party forever, by making two federal holidays into one.

Personally, I don't see why anyone would want to be president. It is a high pressure job with high visibility and high accountability. And in 8 years, you are fired, no matter what.

I suppose ego must be the prime motivator. Rather sad, since I can't see any way to survive such a job with your ego intact.

Personally, I think I'd prefer to be a Senator. You are accountable to much less people, many of whom are too lazy to pay attention to you. Once you become an incumbant, you pretty much have a job for life, one where you get to determine your own salary, and have a seperate pension exempt from the bankrupt Social Security system provided for the unwashed masses. You can stroke your ego by proposing unnecessary/useless filibusters >cough<>cough< or just lay low for a while if you want to regain some privacy for a time.

Anyway, here's a toast to the presidents, and a prayer that Al Gore never joins their ranks.

Abu Ghraib: The Next Generation

Some Australian News outlet got ahold of more Abu Ghraib abuse photos, and released them to the public. Personally, I think it is great!

We all knew these pictures would emerge eventually, and now is the best possible time. The fanatic Muslims are already rioting over cartoons of the "Prophet," so all the rabble has already been roused.

Meanwhile, Europe has not had their usual predictable reaction. Maybe the electoral losses of Germany's Gerhard Schroeder and Canada's Paul Martin have finally convinced the elites they need to do more than slander the United States to maintain their power. Possibly, Europeans in general are sick of all the shit they have to put up with while trying to placate their Radical Islamist communities. Most likely, Europeans realize that these pictures aren't news, they are history. It has been three years since Abu Ghraib, and not a single instance of POW abuse has emerged since. The idea that "torture" is systemic has essentially been disproven.

Kofi Annan, however, is not deterred. He is determined to get the Muslims to focus their rage on the United States, where it belongs! Out of nowhere, Annan and the UN demanded that the US close down Guantanemo Bay. The UN didn't bother sending anyone to inspect the prison, mind you. They just figured they'd buy into the propoganda, and calm the Arab streets by uniting them against a common enemy, us.
---
By the way, tapes with Saddam Hussein and Tariq Aziz admitting to his WMD programs and discussing terrorist attacks have been uncovered by ABC News. Does anyone else think this should probably be on the front page of every major American newspaper?

I've come to an interesting conclusion...

I hate the Republican Party of Virginia. Of all the major candidates and elected officials, George Allan is the only one I have any respect for.

Let's start with Representative Tom Davis, my Congressman. He wasted our time on those idiotic Baseball steroid hearings, as if I care that athletes in a boring sport traded their testicles for a little more power with the bat. He headed the Katrina Commission, where he had the gaul to blame the troubles on "Individual and Philanphropic failures." He has the balls to blame ME? F Him!

Next, John Warner. He wants Don Rumsfeld's job, and acts like a bitch because of it. If Mark Warner challenges him again, I'm voting for him.

And the issues that have me speaking this treason? The REPUBLICANS in Virginia Senate have approved a bill to outlaw smoking in bars and restaurants. Are they on crack? Our economy is tied to tobacco in much of Central and Southern VA. In addition, here in NoVA, we are the only state in the quatro-state area that still allows it! This is a golden marketing opportunity! And most importantly, what gives them the right to tell independent businesspeople what they are allowed to permit in their private property?

Also, REPUBLICANS are proposing an increase in the gasoline tax and sales tax! Do they really think we aren't paying enough for gas? And a higher sales tax? All this while we are running surpluses and the economy is booming.

Sadly, I hate the Democrats in this state too. So, I'm at an impasse.

The Democrats are morons.

They had a good thing with Cheney. They had the world looking at him like some sort of Ogre. But, they may have ruined that now.

To appease the media monster, Cheney gave an interview to Brit Hume. He sounded like a broken man, and one could not help but feel for the man.

Democrats misread the public on this one. The public saw this as a human interest story, and morbidly funny. The Democrats thought we were outraged. They jumped on this, and ended up looking like vultures. And the way the White House press corps reacted! Vultures might sue if I made the same comparison!

And, this whole incident definitely put some very active Conservative groups on notice. I gaurantee the NRA leadership has spent the last three days in their war room, planning for the predictable anti-gun onslaught. The same probably goes for every other gun rights and hunting rights group.

Meanwhile, the whole Katrina report was forced off the front page. The story that knocked Bush's popularity into the 30%s was about to be fully revived, and the Democrats blew it.

In nine days I predict the Democrats will say Karl Rove set this all up.

Can anyone give me any sort of reasonable excuse for this? Note to Gore, just because CAIR says something, and MoveOn backs it up, it doesn't mean it is true.

What is true, however, is that he just played into the Radical Arabs' hands, giving them weeks worth of propoganda. Maybe he should consider a career as a Dutch cartoonist?

Everyone who voted for this man should be ashamed of themselves. As should the media, which largely ignored this story.
---

Meanwhile, in Texas, the current VP mistook a wealthy donator for wild game. Remember that if you succeed in impeaching Bush, Democrats, that this guy is the next in line.

I do wonder if the Democrats will continue to object to Cheney taking Scalia on hunting trips...

Mohammad is a Cocksucker. Ya heard me! 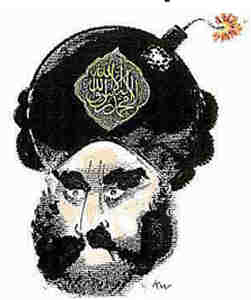 The irony here is that we can't give these assholes what they deserve, because we believe in Free Speech.

This is all over cartoons about the "Prophet" Mohammad, like the one to the left. (Guess I'm marked for death now too.)

Personally, I think the Muslims need to pause a moment and ask if Mohammad really even likes them. They seem to be getting a raw deal these days. And he takes out hundreds of them every year at the Hajj Terrorist Stampede.